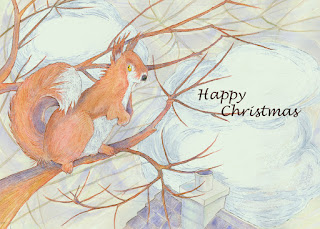 Posted by Gillian McClure at 08:39 No comments:

Email ThisBlogThis!Share to TwitterShare to FacebookShare to Pinterest
Labels: Christmas 2016 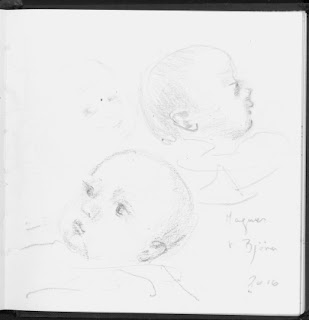 This summer I went with three month old twins and their sister to a Swedish island for a week. It involved a great deal of preparation and packing and it needed a ratio of 5 adults to 3 three children to get everyone safely there and back again.
Tove Jansson's 'The Summer Book' captures the atmosphere of a similar island in the Archipelago Sea but there are no baby twins on that island,  just one little girl and her grandmother. 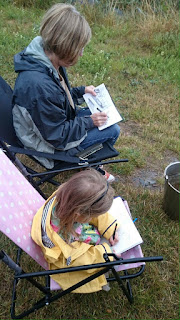 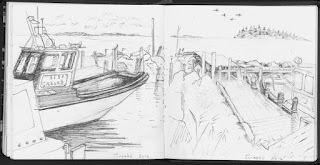 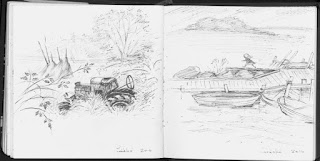 Posted by Gillian McClure at 01:57 No comments: 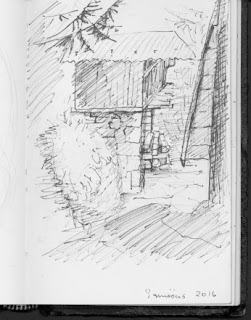 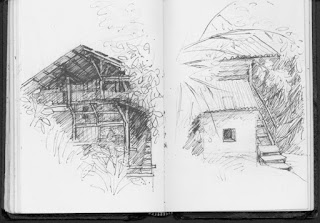 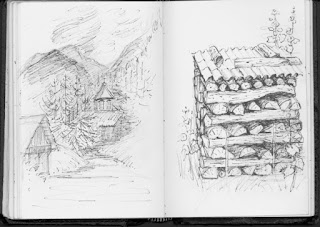 Just had a holiday in the French Alps. Here are some sketches.
Posted by Gillian McClure at 07:25 No comments:

Pam Royds on , 1971 with Sally Christie, children’s author and daughter of Philippa Pearce.

I was just twenty two when I first met Pam Royds, a year after this photo was taken. Pam was the children’s book editor at Andre Deutsch and she was working with me on my first picture book, The Emperor’s Singing Bird. Not having known any editor other than Pam, I took for granted the two decades that I enjoyed her kind and intelligent guidance, believing all editors to be like her – nurturing and patient; allowing an author/illustrator to make mistakes and develop.
I accepted as normal, back in 1972, the invitation to come to her house for a bath and breakfast when I stepped off the overnight bus from for our very first editorial meeting at the Deutsch office in Great . I didn’t argue, when my first child was born and Pam wouldn’t allow me to take part in the wonderful Book Train event, saying I should be at home feeding the baby. And at the various awards ceremonies, over subsequent years, Pam was always by my side, giving advice on  how to lose gracefully and pointing out the authors behaving badly when they didn’t win.
It was a sad day when Andre Deutsch sold their children’s list to Scholastic in the early 1990s but Pam made sure she was there helping her authors and illustrators make the transition. At my first meeting with my new Scholastic editor, Pam was hovering within earshot and when the meeting took a turn for the worse and the Scholastic editor said that, after all, he would not be taking me out for lunch, I remember Pam emerging forcefully from her office and saying, “Well if you won’t, I will,” and marching me off.
Oh dear, how naïve I’d been to believe all editors were like Pam; that all publishing houses were like Andre Deutsch.


And now she's gone: a beloved friend and much missed editor.

SALT ON THE PAVEMENT 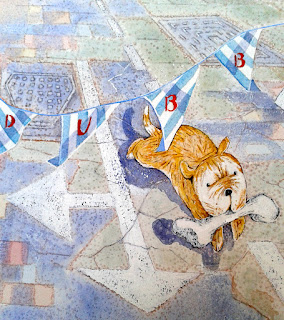 My new picture book Dog on Wheels, to be published by TroikaBooks in September 2016, has a landscape of pavements – rather dull I thought, until I discovered the effect of dropping rock salt crystals into very wet watercolour washes. At first there appears to be nothing happening. However, if you leave the wash to dry naturally and then leave the salt to do its work over many hours, the big salt crystals dissolve into much smaller crystals, picking up pigment and giving a sparkly, grainy, stippled effect – just right for pavements. 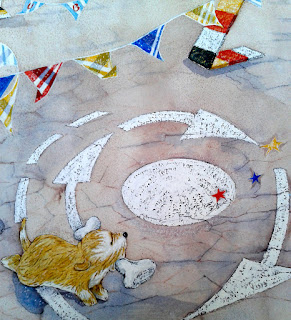 It wasn’t without its problems, though. I now had a strongly textured background which was causing a messy outline when I came to paint the foreground objects. So to avoid this and keep a clean edge, I masked all outlines before the salt wash.
I also discovered it was difficult to apply further washes over the texture without lifting it, so I put the pigment on very dry and then it would adhere and colour the crystal stipple.
The more I worked on this book, the more I discovered about pavements. Walking slowly and looking down at them as if from a dog’s or a very small child’s viewpoint, I suddenly started to see all the amazing drain cover patterns; circles, triangles and rectangles with elaborate geometric  designs. 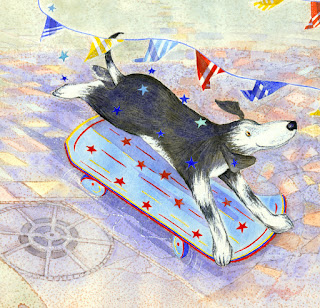 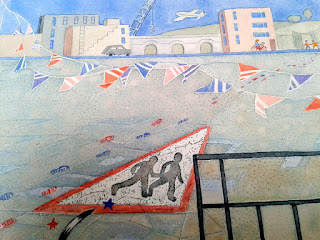 And as well as all these patterns there was all the information in the form of lines, arrows, signs and even shadows. Suddenly pavements were not dull at all! 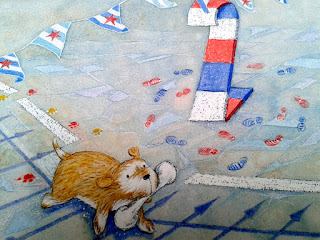 Posted by Gillian McClure at 06:21 No comments: 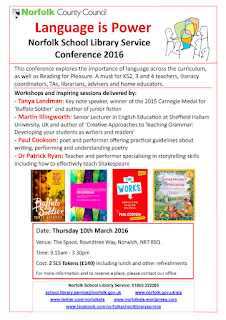 Going through the list of School Library Services in the can be a heart rending process as so many of them no longer exist. However, there is one county defying all the cuts and austerity – . This very rural county has a dynamic School Library Service and, living in Cambridge where there is no longer one, I was happy to be put onto the Norfolk list of authors who go into schools and have them organise both bookings and payment, just like the good old days when the Eastern Arts Association offered this service.
On 10 March I attended a Norfolk SLS ‘Language is Power’ conference in where the audience of primary school teachers, school librarians and authors were challenged and inspired. Key note speaker, Tanya Landman, 2015 Carnegie Winner, (Buffalo Soldier)set the tone for the day when she described the appalling library cuts in this country as the equivalent to the burning of books by unsavoury regimes.
And, Martin Illingsworth, author of Creative Approaches toTeaching Grammar, did not let his audience sit back complacently either, but shook everyone out of their comfort zone with his approach to teaching grammar. Education Secretary,Michael Gove would have squirmed in his seat or left after these two sessions.
But it was the three pupils from , the 2014 Kids Lit Quiz champions and their presentation that really showed the impact a forward-thinking School Library Service with a belief in the power of language can have on rural state schools.

Posted by Gillian McClure at 07:04 No comments:

Exciting news, the latest edition of Selkie has been published by Troika Books.


This will be followed by my next picture book to be published in 2017. I’m busy working on the colour artwork but won’t say what it’s about as I want it to be a surprise. It does have dogs in it.
Posted by Gillian McClure at 06:19 No comments: