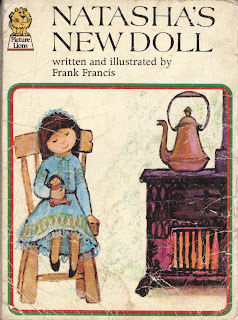 Here's a picture book published in 1971 that my sons enjoyed when they were little; the girly title belies the content.  It's a story set in Russia about a little girl, Natasha, who loses her way in a forest and is captured by a witch. It's Natasha's doll - no ordinary doll - that helps her escape from the witch. 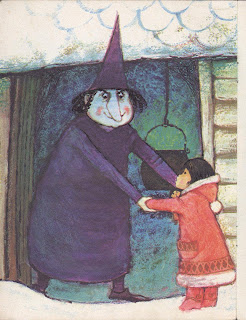 An even more scary witch story is Teeny-Tiny and the Witch-Woman. Published in  1977 and illustrated by Michael Foreman, it was my youngest son's favourite picture book. 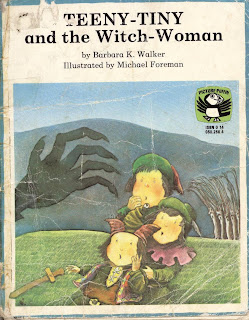 Here's a passage from it that is quite as terrifying as Michael Foreman's pictures of the witch:

'The moon shone down on that knobby white fence. Was it a wooden fence? No. It was made of bones -leg bones and arm bones, little people bones. Teeny-Tiny stared at the fence...' 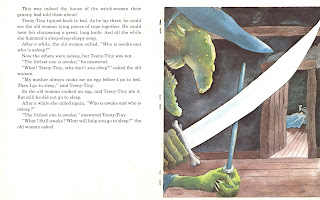 I've always been concerned this story might have had some lasting ill-effect on my son but he reassured me not long ago saying, as a six-year-old,  he identified with Teeny-Tiny, the youngest of the three brothers, who is never taken in by the witch's cunning and is clever enough to help his brothers escape. 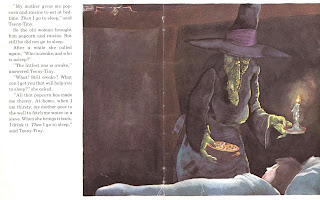 He remembers his father reading him this story and feeling protected because his father's arms were around him making him feel safe. 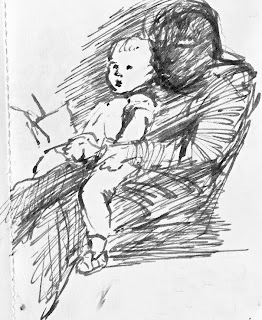 Posted by Gillian McClure at 08:07