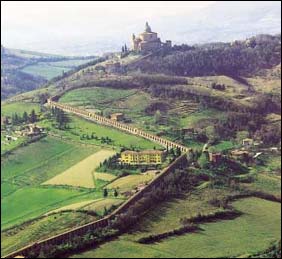 This year I flew out to the Bologna Book Fair on the Sunday, giving myself half a day's sightseeing. I wanted to climb up to the Basilica Di San Luca that stands on a hill overlooking the city. Taking a number 20 bus, I travelled to the place where I thought the walk started but soon discovered I'd got off too soon and was climbing the wrong hill. It didn't seem to matter much - the sun was shining, I had a picnic with me and the whole afternoon ahead of me.
I was soon overtaken by a young man in jogging gear who turned out to be a New York publisher's scout attending the Fair. He was also going to the basilica and was also on the wrong hill. We asked an Italian the way and were shown a road  that would eventually end up there. The publisher’s scout jogged off.
A road with passing cars was not how I’d envisaged my afternoon walk, so when I saw a party of Germans (undoubtably publishers) emerging from woodland, I asked if the path they'd been on could possibly be a short cut to the basilica. They thought so, and I rashly left the road and headed off into the woods. But I'd been led astry; the path soon became an animal track descending into a steep gorge with a stream at the bottom. For over an hour I scrambled down one side of the gorge and then up the other, clinging to roots when the slope became sheer. All around me were the most beautiful flowers – but I was unable to appreciate their scent and colour. I finally pulled myself over the lip of a cliff and collapsed in a meadow just below the basilica.
After lying exhausted in the grass, I tried tidying myself up before looking for the road to the basilica. There was a track across the meadow - I  followed it - and came to a gate standing ajar and beyond, the grounds of a very large house. I could see no way past this house. So I entered the grounds and walked down the drive, hoping to let myself out onto the road without being spotted. But the front gate, set in a great ornate portico, was locked. I was going to have to find the owners of the house and play the humiliating role of a hopelessly lost, hot-and-bothered English lady who had wandered by accident into their garden, if I was to avoid being taken for an intruder.
The family were on the terrace drinking tea, guarded by a vicious mastiff. Quickly, they restrained the beast. Then, politely overcoming their surprise that someone had managed to enter their grounds from the gorge, they graciously offered me refreshment, before unlocking the gate and pointing the way to the basilica.

I sat for a long time in the cool baroque building recovering from my adventure before setting off back to Bologna the correct way, down through the covered arcade. And there I bumped into the publisher’s scout, just arriving, having jogged a huge detour by road over two hills. He was surprised to find I’d arrived before him. As I started to describe my route, the desperate scramble down into the gorge and up again became ‘a little bit of a climb through beautiful woodland carpeted with wild flowers' and the humiliating end to the adventure turned into 'a welcome encounter with some hospitable Italians and their dog'.

The next two days were taken up with the Fair. And it was a good  Fair for me this year because I'd switched caps - I'd changed my story - I was now a publisher rather than an illustrator, selling rights not projects. And those magic words seemed to open all sorts of doors leading to all sorts of bright new ways ahead...
Posted by Gillian McClure at 03:03