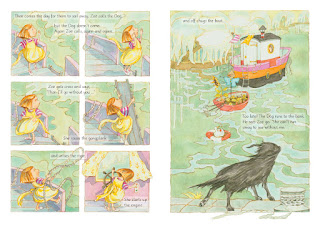 “You can't have your little girl main character losing her temper and going off to sea without her dear old dog.” So said an editor on seeing the first draft of Zoe's Boat years ago. 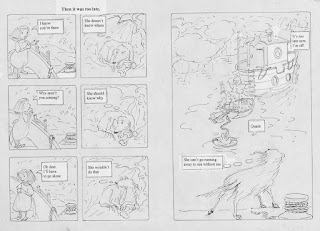 So I duly changed it and, in this draft which incidentally was all in dialogue, had the dog recalcitrant and Zoe sad he wouldn’t go with her.

But do you always have to have a faultlessly appealing main character for a picture book to sell?

David Fickling, in the case of Zoe's Boat, didn't think so. He said Zoe getting cross with her dog and leaving him behind felt true. (I do remember once leaving the family dog behind in a lay-by after stopping on a long journey because a child was travel sick, but that was a terrible accident and thankfully the dog was still there when we returned an hour later.)

Relieved, I reverted to the first draft for, in toning everything down in order to make Zoe more appealing, I’d inadvertently toned down the dynamic in the narrative and lessened the crisis needed at this point to break up the long build up to the main crisis point. Being asked to change the emotion a little had upset the fine tuning of the whole structure of the story. This is the problem with picture book texts - they're not that straight forward - alter one small thing and something bigger goes wrong.
Posted by Gillian McClure at 02:00