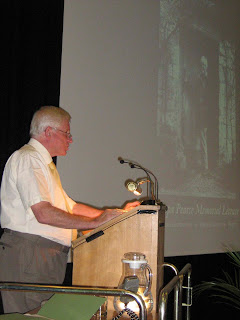 Here is Kevin Crossley-Holland giving the 2013 Pearce Memorial Lecture; the 6th in the series. Kevin’s talk ‘Footprints on the Grass’ was about gardens and children’s books. It left the audience bowled over and silent at the end. Many will want to re-visit it and this can be done as a download from the Philippa Pearce Memorial Lecture website.


However, it isn't gardens that I associate Kevin with, but myths and legends. We collaborated, back in 1992, on a book for the Simon & Schuster’s gift series. Norse Myths. 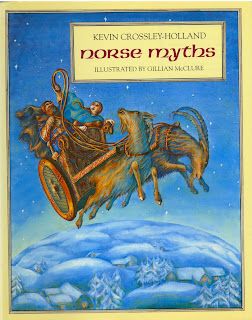 It was a big book with many illustrations and I had to do them at a difficult time of my life. I was moving out of the Mill House in Whittlesford which was, ironically, the next Mill up the river Cam from the one in Shelford where Philippa Pearce had lived in as a child. The move had to be delayed six months as I tried to meet my deadline.
Looking again at the originals - here the pyre for Balder on Ringhorn - I’m reminded of what a tricky commission it was. 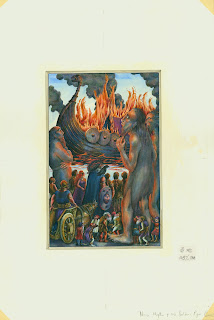 The stories were epic tales of monsters, giants, dwarfs and men, all set in an Icelandic landscape. Kevin’s re-telling of these myths was vivid, rhythmic and poetic –


‘The elves were there. The dwarfs were there. And hundreds of frost giants and rock giants stood there too, a great gang who had followed Hyrrokin out of Jotunheim. That was a vast concourse, a mingling of mourners and the merely curious on the foreshore, scuffing the strip of sand that never wholly belongs to earth or to sea.’

I remember being carried away by Kevin’s story telling which could be very graphic and amusing:
‘Ymir was a frost giant; he was evil from the first. While he slept, he began to sweat. A man and a woman grew out of the ooze under his left armpit, and one of his legs fathered a son on the other leg. Ymir was the forefather of all the frost giants.’
I chose to illustrate Ymir the frost giant as Odin, Vili and Ve hoisted his body onto their shoulders and carted it to the middle of Ginnungagap. 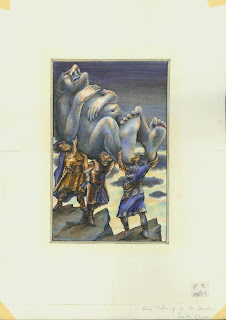 There were many strange creatures to portray: spectres – ‘No sooner was [Balder] asleep than his ghastly skull-guests crept forward yet again, monstrous forms intent on snuffling out the light of him. He threshed and kicked. He called out and his own shout woke him.’
-creatures with extra heads or legs. On the same spread as Balder and his skull-guests is Odin’s horse with its eight legs:
‘Hel’s hound heard Odin coming. The hair on Garm’s throat and chest was caked with blood and he bayed from his cliff cave at the entrance to the underworld. Odin took no notice. He galloped so hard that the frozen ground thrummed under Sleipnir’s eight hooves, and he did not let up until he had reached Hel’s forbidding hall.’ 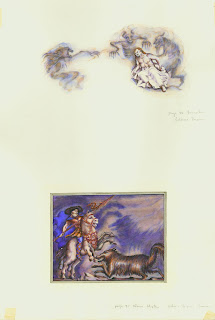 These myths held the violence of the Viking imagination; Kevin captured it in his words and I didn’t tone it down in my pictures: 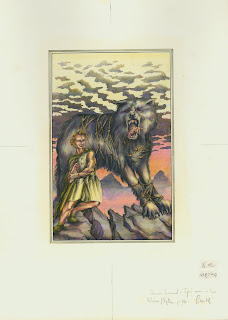 ‘Then Tyr slowly lifted his right arm and put his hand in Fenrir’s mouth…. Fenrir snarled and clamped his teeth; Tyr, bravest of the gods, twisted and cried out, unable and able to bear such pain. The other gods laughed, they knew that Fenrir was bound at last. They all laughed except Tyr: he lost his hand.’
Philippa, I remember was appalled at this image – most unsuitable for British children – though Scandinavian children, with more Viking in their blood, didn’t seem to mind it. I was appalled by something else. An error I spotted at proof stage. I'd painted a left hand and not a right hand in the wolf's mouth. I corrected it but Simon and Schuster did not make the alteration, despite the note below written by my editor indicating they needed to r-originate it. 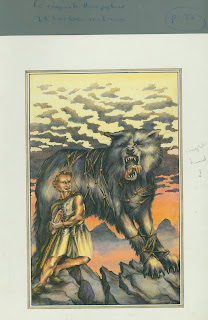 So this is how it is in the published book. I wonder how many children have overcome their horror and spotted the mistake.