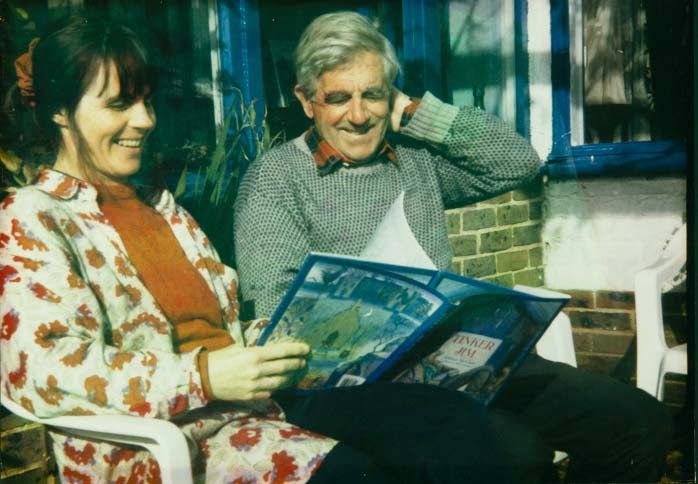 
G: I remember that the collaboration with my father, Paul Coltman, on three picture books TOG THE RIBBER, WITCH WATCH and TINKER JIM, all published by Andre Deutsch and Farrar Strauss & Giroux in the late 1980s and early 1990s felt rather unique at the time, but you’ve done the same thing, Joyce, with your daughter, Polly Dunbar.

J: There aren't many such parent/child collaborations about.
Polly showed early promise. From the age of 5 onwards her Christmas present to me was a tiny picture book she had made. I saved them all - Polly has them now. I was working on books with my husband at the time. I didn’t dream that I would one day work with Polly. It all seemed so far away.

G: Polly must have been a similar age and stage in her career as I was when she illustrated your story, SHOE BABY published by Walker Books in 2005. Did you do anything together before that?

J: Polly was 16 when she published two books of cartoons about teenage life in Norwich.
followed by 4 novelty books.  Then, in 1998 we were asked to do a book for the Family Contact Centres - a place where estranged parents could meet their children on neutral territory (now dismantled of course). This was unpaid, but a great way to start a collaboration.

G: But a big difference between our two collaborations was that my father had always been a poet rather than a writer for children so it was me introducing him to the world of picture books whereas you were already a well established author of picture book and didn’t you share the same publisher as Polly? So was it your idea or your publishers that you should work together on a book? How did it all come about?

J: One day I caught a glimpse in Polly’s sketch book of an old woman stepping over a field of shoes. 6 years later, after many rewrites,  this became SHOE BABY. Polly had already published DOG BLUE & FLYWAY KATIE  with Walker so was well versed in the picture book format, and they took it on. With her student friend Katherine, Polly went on to make SHOE BABY into a puppet show - the start of  Longnosepuppets. The show won first prize at the Brighton festival in 2006 and has been on tour ever since.

G: Like Polly, I’m both writer and illustrator and I found that I was not just illustrating but involving myself in the text as well. This didn’t happen with the first book, TOG THE RIBBER, which was a poem my father had written several years before and it just happened to fall neatly into the 32 page format of a picture book. However, with the next two, WITCH WATCH and TINKER JIM, I worked closely with my father on the text alongside the illustrations as he didn’t ‘think in picture book format.’ Did Polly ask for any changes in your texts?


J: Not for SHOE BABY - where unusually, not a word was changed. However, for PAT -A CAKE BABY -  she was trying out new techniques and had this ingenious notion of making the words part of the pictures. This meant cuts and changes. We had a lot of fun - and sweat - working it out. Because we have a shared sensibility in some ways, it feels like a book by two people rolled into one rather than two separate individuals - a special pleasure for me  because I would love to have been an illustrator as well as a writer. Every publishers dream is the person who can do both.


G: And equally, did you make any suggestions at the rough stage of her illustrations? Or maybe that was all left to the designer at Walker Books? I remember sending the first roughs to my father rather than to the designer for, back in those days, there wasn’t the same close interaction with an in-house designer at the early layout stage of a picture book.

J:Polly worked closely with the designer, Liz Wood, and also with me. She showed me the dummies at each stage and I was allowed to comment. It’s a delicate balance and you have to be careful not to impose anything on the illustrator. Of course, I was just carried away by the sheer joyousness of Polly’s work so it was no problem.

G: You’ve worked with many illustrators, Joyce, how did working with your daughter compare with other collaborations?

J: Well,  I don’t find many illustrators sitting on the end of the bed in the morning when I wake up; quite often you never even get to meet them. I take great care to keep out of it until Polly is ready to show me. I worked very closely with James Mayhew on the MOUSE & MOLE series, but never interfered or gave instructions. That is a no-no. More usually the publisher sends me the dummies at different stages for comment. The special thing is that we each know where the other is coming from.

G: When my father and I first worked together, I remember Dad finding the whole process of illustration very slow (I was juggling it with a new baby and a house move) and he would keep phoning to try and hurry it along. I expect you’re much more understanding of illustrators and deadlines, Joyce.

J: I never hurry it along, especially now that I have to wait in a long queue while Polly is working on other books.  You have to leave the illustrator to get on with their side of the dance. You are equal partners - except that I do think the illustrator makes or breaks the text. In this case, the illustrator is the inspiration for the text, and the incentive. Without Polly, neither of these texts would ever have been written. I can’t hurry myself along. I had the idea - but couldn’t make it work. Then one day Polly was ill in bed with flu and she did some sketches of these tiny candy babies making a cake - with outsize rolling pins and so on. I knew then that I had to make it work - but it was another 6 years and mountains of scribble before the text was acceptable. Now it all looks so simple.


G: The collaboration with my father ended when Andre Deutsch’s children’s list was bought by Scholastic and David Fickling, our new editor, turned down the fourth book, Proteus, Guardian of the Seals.  This eventually somehow morphed itself into quite a different seal legend, SELKIE and I returned to being both author and illustrator. Your collaboration is not yet over, though, and you have a new book coming out…

J: PAT-A-CAKE BABY comes out in April. There is something so exciting to children about making a cake - so I wanted the words to capture all the fizz and feel and frolic of the process. Polly has taken this as far as it can go - to HULLA-BALLOONY-MOONTIME. The
words, like the cake, seem edible. 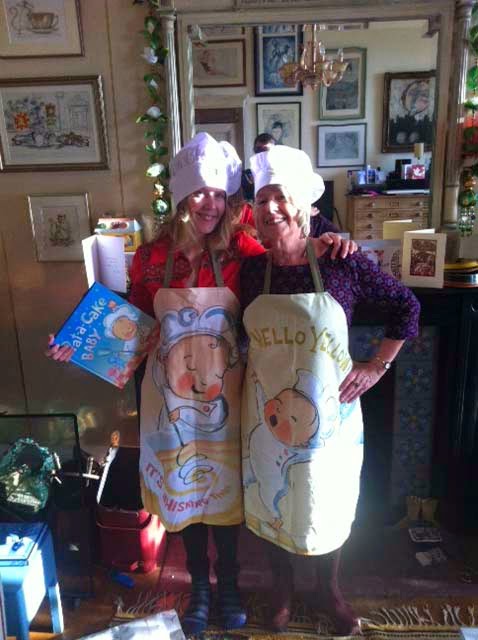 Posted by Gillian McClure at 01:23