MOUSE IN THE HOUSE 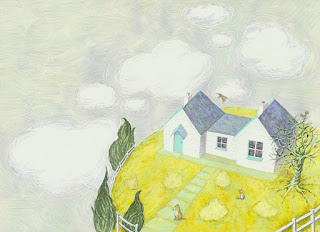 I dedicated Mouse in the House to Connor, who is eighteen months old and can point to his eyes, ears, nose and fingers. His cousin, Liv, is two years old and starting to link her eyes to ‘seeing,’ her ears to ‘hearing,’ her nose to smelling and her fingers to touching. 'Mouse in the House' is the new Plaister Press book and is aimed at the very young child beginning to become aware of the senses. 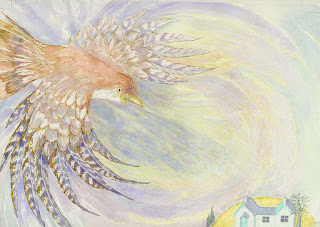 Is there a mouse living in this house? Well, the bird has seen it, 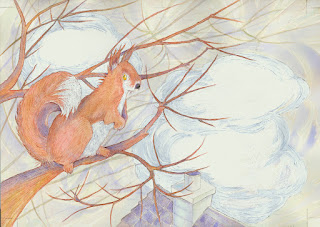 the squirrel has heard it, 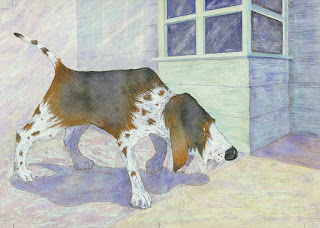 the dog has smelled it and the cat has even touched it. But this is no ordinary mouse… 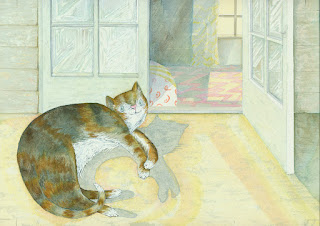 This is a simple, question and answer mystery story that I chose to write in the style of a nursery rhyme with the rhyme running over the page turn. I matched this two page rhythm with a parallel rhythm in the pictures. Each animal is first seen on a double spread, followed by a close–up after the page turn where the rhyme falls; like a camera zooming in, on the eye, ear, nose and paw (in the case of the cat.)
It took me a long time to arrive at a style of illustration to match this story. Reading to both Connor and Liv, I realized that they didn’t need flat primary colours to be able to read pictures. So in the end, I settled for large painterly double page spreads in water colour with a scratched texture and simple bold patterns. The technique I used for this was to put down a dark ground colour first, then coat it in white gouache which I scratched with a pen nib at the point of drying. I'd recently seen an exhibition of Winifred and Ben Nicholson's paintings at Kettles Yard and was influenced by their scratchy look.

Posted by Gillian McClure at 04:59