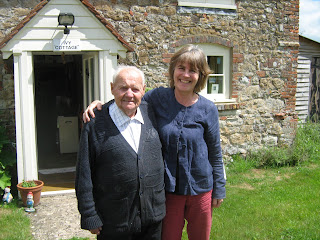 The story of Dunkirk and the little boats that is currently being celebrated has a special interest for me - I wouldn’t be here were it not for the paddle steamer, the Medway Queen, that rescued my father from Dunkirk beach.
Now I have another strand to weave into that story. My father died in 2003 but still alive and living alone opposite my parent’s house in Washington village is a farm labourer, Frank Brooks. He was with the Rifle Brigade in Calais in 1940 when my father was on Dunkirk beach. Frank’s battalion was guarding the port and holding back French refugees; pregnant women and children, all trying to board the ships and escape the 1st Panzer Division that was encircling Calais. Just before the battalion was forced to surrender, Frank attempted to rescue an injured friend lying outside his bunker. He was carrying him to safely when a mortar hit them. The friend took the full blast and was killed; shrapnel tore through Frank’s trousers and arm. So at the surrender, when the Germans pointed their tommy guns and ordered everyone to raise their hands, Frank could only raise the one hand.
After days of no sleep and very little food, the captured soldiers were forced to march 200 kilometres across France; a land littered with the corpses of animals. They ate horse meat and mangle worsels dug out of the earth and finally reached a POW camp at Thorn (Stalag XXA). There the Red Cross documented and photographed them. At the next camp, Frank saw that photo and was unable to recognise himself. From then on he was just a number, 8128.

From Torn they were sent in trucks along a small rail track to the Polish camp at Marienburg (Stalag 20B). For the next five years, Frank worked on a small primitive farm where he was given extra food. The POWs who worked on farms were moved out of the camp to a Fire Station Depot where they were locked up at night and let out to work during the day. The farmers wore military armbands and were responsible for the POWs on their farms. No one attempted to escape.

On the farm where Frank worked there was just the old farmer, his Fraulein and a mentally deficient maid who had been sterilised. During the six winter months, the nearby river froze; wagons had to be converted into sledges and everything was moved into the barns which formed a long line of buildings. It was an orderly life with no waste. The pigs were killed by a single axe blow; their throats cut and the blood made into black puddings and sausages. Every part was used right down to the fat which was made into lard and given to the POWs on rye bread. The German army took a share of everything.

When winter ended the livestock was taken out of the barns. Cows were milked in the fields; hooves shankled by a cord. Eels were harvested in the river and ploughing was done by a team of four light draft horses pulling the plough with a chain; stepping over it at the corners of the field when they changed direction. It was in spring time, when doing the ‘long work’ (ploughing a long stretch of the field), Frank told me he felt happy. Seated on the rear left horse, leading another to his right and two more in front of him, he would crack his whip - made of willow with a dried eel skin tied on to give a bigger ‘crack’- over his head and sing.

Life on the farm came to an end when the Red Army advance meant the area had to be evacuated. The farmers became refugees themselves and the POWs were forced to march for three months back to Brunswick in Germany, covering 20 to 40 kilometres a day along the Baltic coast, sleeping in barns, churches and factory building - sometimes out in the open. This march became known as the ‘march of death’; the winter of 1945 being the coldest of the century. Those who survived it and reached Brunswick were left to fend for themselves in an old disused brewery until they were liberated by the American 8th Army in April. The POWs all had dysentery and their weakened digestive systems were unable to cope with the rich food the Americans fed them. Despite this, Frank’s abiding memory of arriving back at RAF Lyneham in an old Dakota on 19 April 1945 was of the NAAFI serving tea and doughnuts. He weighed less than seven stone. It took a two month regime of malt, cod liver oil and vitamin tablets at Stoke Mandeville Hospital, plus a good delousing, to restore him back to normal.

Frank turned 100 last weekend and there was a huge party in the village. I could not stay on for it and so celebrated with him the day before. All he asked for was a card, a donation to the Poppy Appeal and an outing to a nearby garden centre for a cup of tea and a doughnut. 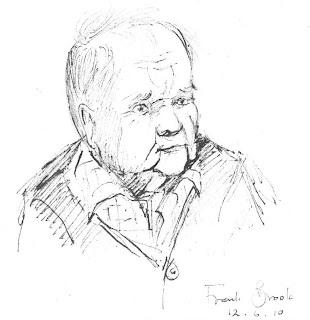 I'd like to thank Midge Gillies for checking out Frank's details in the Rifle Corps Office, Winchester.  Midge is currently writing a book about Polish POW camps.
Posted by Gillian McClure at 06:09