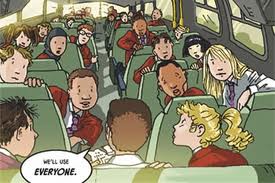 The Boss by Patrice Aggs and John Aggs
I went to the CWIG meeting on graphic novels and comics last Tuesday evening when a panel of illustrators plus Lizzie Spratt from Walker Books showed images of their work and talked about issues relating to this genre.   My latest book Zoë’s Boat, to be published in March 2012, is a picture book in graphic novel form for very young children. This is what brought me to the meeting.  It's aimed at children who cannot read so the story needs a satisfying read-aloud text. Children as young as 4 years old are very adept at reading a sequence of images even when they are unable to read text but most of what was discussed by the panel was aimed at 8years and older – children who would be reading speech bubbles and text silently themselves. The emphasis of the evening was very much more on the graphics than the style of writing.
Philip Pullman who has a great interest in the graphic novel said in his Pearce Memorial Lecture that they should be written in the present tense as pictures always sit in the present. I can see this with the older graphic novels and comics where there’s an immediacy created by all the speech bubbles, but with younger children it begs the question – shouldn’t this rule apply to all picture book texts? I’m still mulling it over – trying to decide whether a shift to the present tense would add impact to my story in graphic novel form.
I was interested to see that the illustrators working in this field were very young;  a graphic novel is much more work than a picture book as I've discovered working on Zoë’s Boat - all those image frames – it needs a young pair of eyes!
The next generation was very much in evidence on panel last Tuesday – Will Fickling  - resurrecting, in the  form of the aptly named The Phoenix. The Weekly Story Comic his father David Fickling’s DFC comic which folded in 2009 after 53 issues. And there was Patrice Aggs’ son John Aggs doing an exciting new graphic novel for Hachette as well as working on books with his mother. I once did an author visit to John's prep school, Dorset House, where my sister was his teacher. He looks very different now from the little boy in grey flannel shorts and blazor!
It was a good evening and I went home inspired to do more books for younger children in this format despite tired eyes.
Posted by Gillian McClure at 10:45