CHANGES TO THE TYPEFACE 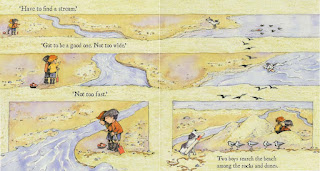 Well, the coloured typeface in We're Going to build as Dam did all change – for two reasons: coloured font presents problems for overseas translation if it’s part of the colour plate and if it’s going to have to be printed separately then that’s extra cost. The other reason was aesthetic – the black font looks good with the black line. It’s all a bit stronger. Now I have to decide whether the boys voices are going to be differentiated in tones of black – the more emphatic character in bold possibly. However, the more I read the story on its own without pictures, the more I’m in favour of leaving them undifferentiated. They are simply two boys – anonymous.
The two boys who inspired them both happened to be called Calum – or more often ‘the two Calums’ - as if they were one. Here’s a photo of them having just made their dam on Kiloran beach. On a rare sunny day all those years ago! 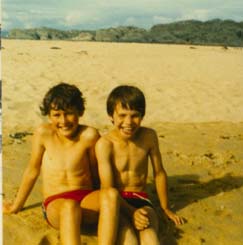 Posted by Gillian McClure at 07:49