When Gillian kindly asked me to write about some of my experiences with illustrators, I was surprised to find that I'd never really written about this subject before. I've had some wonderful artists providing images for my work over the many years that I've been published. There was a super cover by Anthony Brown for my collection of spooky stories, Letters of Fire, and Emma Chichester Clark painted most beautiful images for the original three volumes of the Egerton Hall trilogy: The Tower Room, Watching the Roses and Pictures of the Night. My collection of stories from the opera (The Orchard Book of Opera Stories) had a different illustrator for each of the nine stories I was retelling and they were among the best in the land: Emma Chichester Clark again, Jane Ray, Sheila Moxley, Ian Beck, Sarah Field, Sophie Windham, Louise Brierley and Katya Mikhailovsky.

My latest picture book, It's Time for Bed, was published by Piccadilly Press yesterday. It has most delightful pictures by Sophy Williams. I suggested Sophie to my editor but I've never met her, and I've only met Emma Chichester Clark briefly at the launch of the Opera Stories book. I know Jane Ray slightly better but in most cases, I don't meet the person who illustrates my books. This goes right back to the very beginning of my career when almost the first thing I ever wrote, A Thousand Yards of Sea, was given wonderful pictures by Joanna Troughton. I've never met her either but she and I and Emma CC and I now follow one another on Twitter, where I've got to know them somewhat better.

In 2004, Emma Chichester Clark illustrated a whole book of mine, and that was the fulfillment of a long-held wish. She provided the pictures for My First Ballet Stories. and it's one of the loveliest productions you could wish for. There's a full page painting for each of the ballets, and other pages are decorated with pretty borders. There are also smaller vignettes scattered throughout. Here are two of the images, home-scanned, and therefore not doing the originals anything like justice but they will give you some idea of the work. The Swan Lake image I particularly like because it's not the normal cliche of the swans, but highlights instead the sinister Von Rothbart, whom Emma depicts as an owl whose 'wings obscure the moon.' 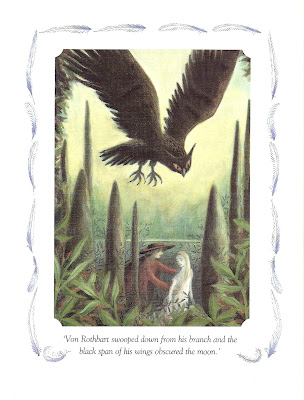 Those are my words of course, but she was the one who seized on them as being what she chose to illustrate. We had no correspondence about it whatsoever but I was thrilled to bits with the way the book turned out. The second image is from the Firebird, and I chose it for this piece because of the wonderful, vibrant green and gold in it. Again, it's not at its best in my scan, but in the book, that green sings from the page. 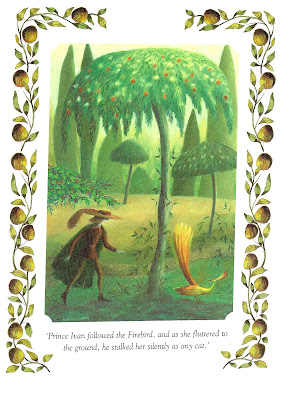 Sleeping Beauty,  illustrated by Christian Birmingham 'glows with light and magic.' So says one of the reviewers on Amazon and she is quite right. 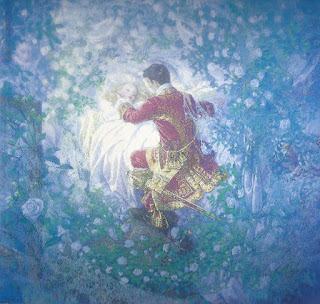 This book came about in a rather unusual way. Christian fell in love with a French château and wanted to do a version of the Sleeping Beauty story set there and specifically in the early seventeenth century. He looked about, through the publishers, for someone to write the story and chose me, for which I am very grateful. We did meet to discuss this venture but only once, and then I didn't see him again till the exhibition of his artwork just when the book was launched. Here are two images from the story: the moment when the Wicked Fairy, (who is called Skura in my version) curses the young princess Aurora in her cradle and the moment just before Prince Florian kisses her awake. Once again, the images you can see do not do justice to what you will find in the book. 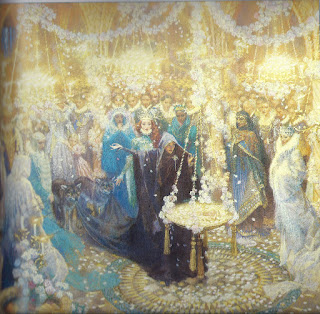 I'd finish by saying that whether I know them or not, I'm immensely grateful for what so many wonderful artists have done for me and I would like to thank them all. If any of my books can be called beautiful, it's thanks to them. We have the best illustrators of children's books in the world, and they add immeasurably to the joy of the reading experience.

Posted by Gillian McClure at 02:00