IN CONVERSATION WITH PIPPA GOODHART

In this post I’m in conversation with children’s author, Pippa Goodhart, pictured above. She invited me to a lovely lunch at her house a couple of weeks ago and it was at that lunch that I met her dog.
Gillian McClure: I was very taken with your dog Winnie now renamed ‘Winnie the Trifle Licker’ after her small indiscretion at your lunch party the other week.  But where does the name Winnie come from? Though  I think I can guess.
Pippa Goodhart:  My husband, three daughters and I went to to see eight puppies, all of them wonderful fat wriggly half-collie half-spaniels.  After much agonising, we chose the one that they were calling Splash, because of the shape of the marking across her face.  My youngest daughter suggested on the journey home that we might call her Winnie instead; Winnie the female-canine, named after the Winnie the Witch.  I’d just started working on Winnie the Witch stories and Winnie stories paid for her. 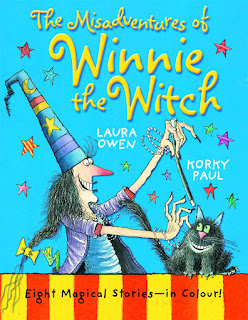 Gillian: Well that explains all her doggy mischief. I’d love to know how you came to write the stories about Winnie the Witch and why you write them under a pseudonym.

Pippa: Australian author Valerie Thomas wrote the first, very simple and clever, story twenty-five years ago. Korky Paul illustrated it in his brilliantly mad, energetic, funny and inventive style, and Winnie the Witch came to picture book life. In the quarter century since then, a number of other Winnie picture books have come out. But, about four years ago, OUP decided that they wanted some longer story books about Winnie, aimed at a slightly older age group. There would be four stories in a book, illustrated in black and white. Valerie Thomas didn’t want to write them, but she agreed that I could write the stories so long as the invented name of Laura Owen was used on all the book covers.
Gillian: Was Laura Owen your name or Valerie’s?

Pippa: The choice of ‘Laura Owen’ was entirely Valerie’s. I suggested just putting Korky’s name on the cover, and leaving the author out altogether but she insisted on the Laura name.
I’ve written sixty-four stories about Winnie and her cat Wilbur … and in one of them there’s a clue that I’m the ghost writer of the those stories!
Gillian: I’d love to know which one.

Pippa: The story that gives a clue to me being the ghost writer is ‘Winnie And The Ghost In The Post’ (it comes in Mini Winnie). Winnie, who is no good at reading or writing, decides to use a ghost writer to help her enter a poetry competition. She sends off for a ghost, which she calls Post Ghost, or PG for short .... ie my initials. I’m sure nobody ever notices it, but it pleased me to sneak myself in there!

Gillian: Fascinating. But was it hard being a ghost writer? What sort of problems did you encounter?
Pippa: It was odd taking on a fictional character who already existed, and I wasn’t sure how that would work. So I began rather tentatively, feeling my way. But I soon realised that my stories were only going to work if I made Winnie and Wilbur my own characters. Winnie needed to be a more complex character than she is in the picture books because the stories are a lot more involved. Winnie is a strange mix of adult and child, along with the ability to do magic…but that magic must be used sparingly, or everything could be too easily solved, and you’d have no stories! Meanwhile Wilbur the cat is much cleverer than Winnie, but he can’t do magic, and he is a cat who can’t talk beyond a meow. The two of them, loving and bickering, make a fun pair to play with.
I also play with language in the Winnie stories, and that’s something that people seem to either love or hate (see the Amazon reviews!). Winnie exclaims in ways that sound dangerously as if they might be rude, but actually aren’t (“Thank knitted noodles for that!”) and she does eat some disgusting things. So, for example, having finished making a sandcastle at the seaside, Winnie says to Wilbur,
“There! That’s as pretty as a ferret in fairy wings. I reckon we’ve earned ourselves a nice lice lolly.”

Gillian: I think children love that sort of thing and also it’s good for making them think creatively about words. Finally, what about the collaboration with the illustrator Korky Paul? I’m interested to hear about that.
Pippa: As you can imagine, writing with Korky Paul illustrations in mind is a treat because he likes things the madder the better! I can leave gaps that I know that he will enjoy filling. I can put something like, ‘For breakfast Winnie had one of these … some of those…and a few of them’, and Korky will invent the most wonderful things on plates and in packets and creeping out of pockets!

Gillian: I bet Korky would have done a really funny drawing of Winnie licking the trifle. 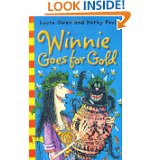 Posted by Gillian McClure at 10:44