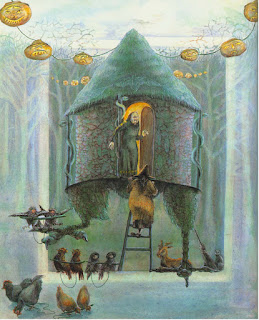 The witch, Baba Yaga, lived in a house on chicken-legs and I used this image in Witch Watch, a picture book I did with my father Paul Coltman in 1989.
There are witches’ houses on chicken-legs, I discovered, in Susan Price’ book The Ghost Drum, first published two years earlier in 1987 and I was fascinated by her descriptions of them. 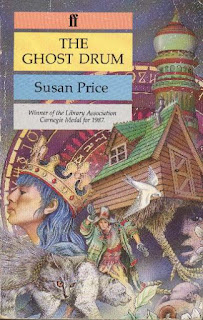 Here’s the passage where we first encounter a house on chicken-legs in The Ghost Drum:

‘Out in the night, in the snow, stood another house. It stood on two giant chicken-legs. It was a little house –a hut- but it had its double windows and its double doors to keep in the warmth of its stove, and it had good thick walls and a roof of pine-shingles. The witch came running over the snow, and the house bent its chicken-legs and lowered its door to the ground. The double doors opened, in went the witch, and the doors banged shut, one after the other.
The chicken- legs straightened again and lifted the house into the air. The legs began to move. First they paced up and down on the spot, the talons on their toes raking through the crusted snow with splintering sounds of broken ice. Then the legs took a few quick, jerky steps, sprang, and began to run. Away over the snow ran the little house on its chicken-legs.’

Susan’s brother Andrew did this image for the e-book cover of The Ghost Drum: 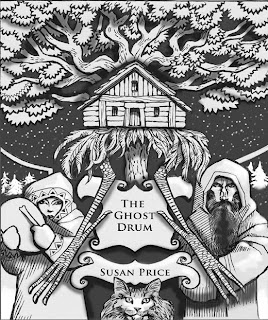 These houses can be a bit unpredictable:
‘Safa ran after the hut – which had wandered away, scratching the ground, on its chicken-legs.’


And they can make a racket. Here, one of them sounds the alarm:


‘The hut on chicken-legs began to stamp its taloned feet, and to make strange cackling, crackling noises like a chicken, or like a fire.’

‘From every part of the world came huts walking on ducks’ feet, bears’ feet, donkeys’ feet, bringing witches and apprentices to congratulate the old witch on her pupil’s success.’


It's such a great image;  I like to try to imagine them running about among  the‘legless houses’ of our own towns and cities.

Posted by Gillian McClure at 01:06