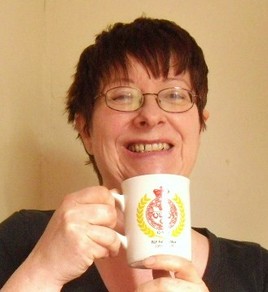 In this post Susan Price is telling me more about her book The Ghost Drum which won the Carnegie Medal in 1987.

GM:  Having been drawn to your book, The Ghost Drum, by the fascinating imagery of the witches’ houses on chicken-legs, there’s so much more I’d love to know about the story. The Ghost Drum precedes Philip Pullman’s trilogy His Dark Materials by a decade yet it equals it in magic and suspension of disbelief. How did you research it?

SP:  I’ve been reading fairy-tales, folk-lore and mythology since I was nine. My head is crammed full of images and motifs. I’d read about Lappish witches and their drums – the Vikings were quite scared of Lappish witches!
The Ghost World books no doubt grew out of this mulch of folk-lore, but the idea arrived in one blow. It was as if I’d been given a postcard with a picture on it, and told – no, ordered – to ‘write about that.’ The picture showed a snowfield below a dark sky filled with stars. In the middle was a great Russian palace, with many towers and domes, all with those bright, jewel-coloured tiles.
So the story arrived with its atmosphere set. It had to be in darkness and intense cold, but splashed with colour. I knew that it was a of the imagination: the of fairy-tale. I knew that the story was to have magic and witches, and was to be as frightening as it was beautiful. I also knew that the story was to be about someone who had been born in the room at the top of one of those domed towers, and had never left it.
I did research it, to an extent. Suzanne Massie’s book, ‘Land of the Firebird’ was invaluable to me. In it I found the details about the palace windows being made of thin, painted mica. But much of the book was simply made up, using motifs from legends and fairy-tale.
It took me something like three years to write Ghost Drum. I broke off and wrote other things to pay the bills while I worked on it. I became so worn out with it that I decided it was no good, and not worth wasting the postage to submit it. I put it away in a drawer and forgot about it for months. Then I came across it, read it, and thought it was the greatest thing written since writing was invented.
The truth was somewhere between these two extremes! However, I rewrote it again, submitted it, and it was accepted by Faber in the , and Farrar-Strauss in the , almost by return of post.


GM: So it started as a powerful visual image. That must be the artist in you.
Was it difficult to write about travelling to other worlds?


SP: It was, at first. Two things helped me. One was the account of a Viking funeral, given by an Arab trader. He said a gate was erected to represent the entrance to the other world. A slave-girl (who was later killed to accompany her dead master) was lifted up so she could see over the gate, and she said she saw her master waiting for her on the other side. (She’d been drugged.) This plain image of a gate worked for me as a passage from one world to another. I wanted something solid and easy to imagine.
The other thing that helped me was thinking about the very vivid, real dreams I’ve always had. I’ve never had a dream where I knew I was dreaming. No matter how bizarre, my dreams are always 3-D solid, with full colour and sound.
I thought of various folk-lore ideas – such as the one that says you shouldn’t wake someone suddenly, because their soul goes wandering in other worlds while they’re asleep, and will be lost if they’re jerked awake. And then there’s a Bushman saying I copied out and kept in mind while working on the Ghost World books: ‘Somewhere there is a dreamer dreaming us.’
This helped me imagine the shifting from one world to another, because I know what dreaming is like – and if the apparently real worlds we visit in our dreams are actually other worlds, then it’s not so strange!


GM: That explains it so well and likening it to the idea of dreaming makes it all so convincing in your story.
Finally, I really liked the cat narrator. Was that your own invention or does he relate to a bit of folk-lore you absorbed when you were a child?

SP: The cat... Well, first, I love cats... And then I saw a Bilibin woodcut called 'Sir Cat the Wise' and saw references to this cat in folk-tale.
Then I've always been interested in traditional ways of starting stories. We have only, 'Once upon a time...' but originally there were many ways of starting and ending a story. 'Once upon a time, when dogs drank wine, and monkey chewed tobacca...' or 'I went to the garden to pick a bit of thyme: I've told my tale, now thee tell thine!'
I came across a couple of traditional Russian beginnings. One I've used elsewhere - the stone squirrel who runs up and down a tree, and for every nut he cracks, he tells a story. (Very like Norse Myth, and, of course, the Russian city of was founded by Vikings.)
The other beginning was about the cat tethered to a tree, and as he walks one way, he sings songs, etc.
I originally put this at the start of the book because I loved the image, and I like such odd ways of starting stories. To me, it was like the painting on a Russian lacquered box - a dream like image and intense colours.
But then I found the story becoming quite complicated, and thought it would be useful for younger readers (or listeners) if the cat began each section, reminding them what had happened, commenting on the action, and preparing them for what was to come. That's as deeply as I thought about it, but apparently, it means that the book has three narrators (?) and is quite !
Years after I wrote the Ghost Drum books, the beautiful Biffo came to live with me. 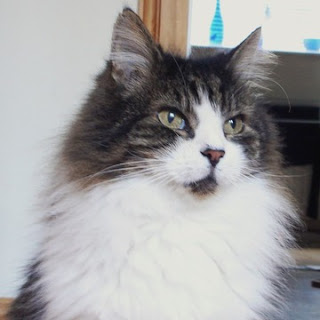 If he wasn't a Norwegian Forest Cat, then he could certainly pass for one, and he was definitely wise. He could have walked on as the Cat Who Walks Round the Tree without rehearsal - except that no one would ever have got him to wear a collar and chain, not even a gold one!


GM: I love the fact that there’s a practical reason for having the cat narrator as well as it adding a traditional resonance. And Biffo is indeed a most beautiful, wise–looking cat.