Nurit Serfaty is a renowned Israeli illustrator whose whole family are involved with children’s books. We became friends when she first came to visit her daughter and granddaughters who live opposite me in . Since then, we meet every time she comes over to talk about children’s books. We discovered we had so much in common; besides both having overseas grandchildren we're both illustrators running small publishing companies and do a lot of school visits. In this interview with Nurit, I want to share some of her lovely images done in a great variety of media and find out more about the fascinating differences between the children’s book world of and that of the . 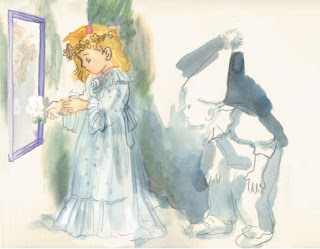 G: Of course the greatest difference between your books and ours is that yours read from right to left which feels very strange to us. 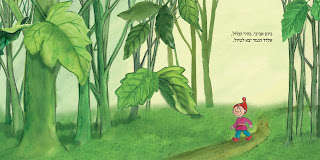 G: And the other way round too, I suppose: an Israeli co edition of a UK picture book might need its illustrations flipped round so they read pictorially from right to left.

I have another question: Israel is a much smaller country than the UK, what impact does this have on your children’s publishing industry?


N: Not only is a small country, about 50% of the population does not buy books very often (mainly Arab societies and orthodox Jewish, who have their own markets). So we are actually talking about even a smaller number of people (There are 8 million Israeli citizens).
Yet, has a very live and active book industry. According to the data I found online, every year there are about 6000 new titles (according to the national library of Israel every 80 minutes a new title is published), out of which 600 children's books.  About 34 million books are sold every year, 17 million of which are fiction and non fiction.
Israelis like buying their own books and "own" them, and until recently borrowing books in libraries was not very common. Also, in most children’s books are printed as hard covers. It probably has to do with the way books are marketed or the way the Israeli reader is used to see his books- soft covers are mainly for notebooks and activity books. If a picture book is printed as soft cover it won’t be treated as “high quality” book. 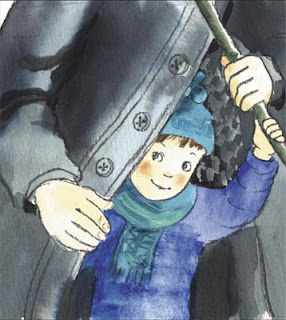 Under Grandpa's Umbrella written by Raphaella Serfaty       Acrylic on paper


G: So there's a lot book purchasing going on. Does this mean, in , it is easier for mid-list authors and illustrators to earn a living than in the where it is pretty difficult?


N: Although there's a need for new children's books all the time, authors and illustrators are not well compensated. The agreements signed with publishers are very strict - some times you get royalties only after the first edition (about 2000 copies) is sold (this is mostly relevant to authors, as illustrators are normally paid a one-time fee and not royalties). New authors and illustrators might be asked to pay some of the printing and marketing fees.
This is why I, along with my husband, Lavish, and our two daughters - Shulamit and Raphaella decided to establish our own publish company. Jolly Giraffe. 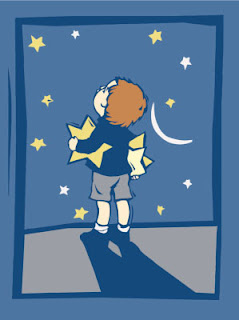 Where Are the Clouds Going to? written by Lea Tzur     Papercuts

G: I’d love to hear more about your publishing company and the physical books you publish - I'll devote another post to your apps.
N: Our publishing company found the niche of preschool visits where I run my visits and also sells books. Preschools have budget for birthday gifts and end of the year events (like you have for Christmas here), and we sometimes manage to market our books as an idea for these occasions. In these cases a preschool might buy 30 copies of a book. 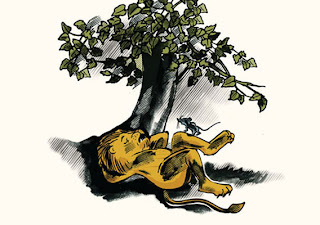 We publish our own books, which we write, illustrate and design, as well as other authors’ books.
I would say half of the manuscripts we published are children’s books and half are more like Memoirs. is a relatively young country and people feel they need to tell their personal stories - whether it’s to share childhood memories from their mother land, to recount how they survived the Holocaust, to tell how they immigrated to or to commemorate a personal event. 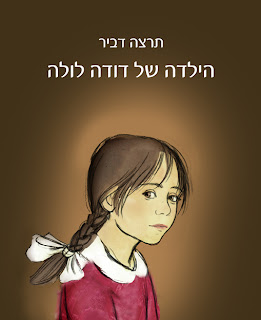 G: You are illustrating a children's book about the Holocaust. Can you say a little about it?

N:  It’s a story about a little girl who survived the war together with her mother. The author of the story gave me a photo album with pictures of her family. I thought it would be nice to integrate the photos in the illustrations, making a collage of my illustrations and the original photos. For the illustrations themselves I used watercolors and then added some airbrush effects on photoshop. 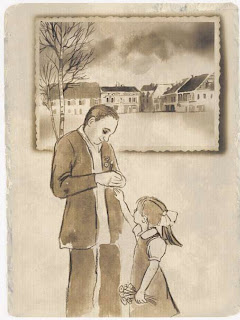 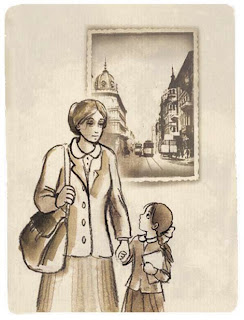 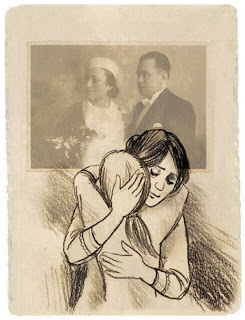 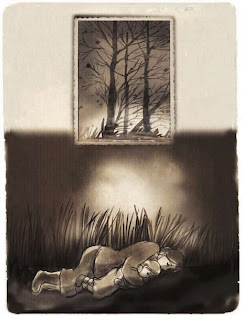 G: These pictures are still at the rough stage, but they are so full of feeling, I know this is going to be a moving and powerful book, Nurit. Thank you so much for allowing us an early glimpse of it and also for sharing this perspective on Israeli picture books.

Posted by Gillian McClure at 04:20