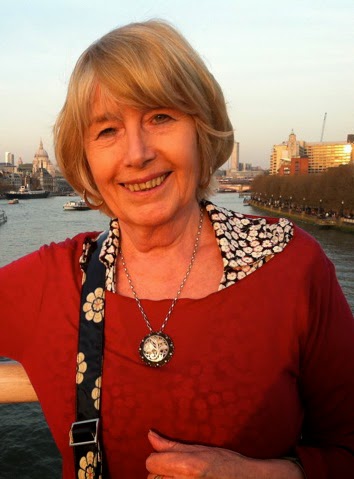 Thanks so much for the copy of FLOOD. It's a lovely book and to me it's a marvel that you have written, illustrated and published this book on your own. A brave undertaking! You need a very special combination of skills. At first you must have been a lone ranger - but as recent articles show, more and more authors are taking charge in this way - including many who are previously published.

The rest of us are threatened on two sides - on the one hand the new breed of self published authors - often very media savvy - why else would they do it? - and good at self promotion. On the other side, publishers forming larger and larger conglomerates with a tight agenda - and with precious few exceptions, smaller publishers afraid to take risks. Which leaves traditionally published authors somewhat stranded.

It's a beautiful book, with your characteristic variety of texture and delicacy of tone - telling a story with a strong theme of survival against the odds - in such a quirky way that I couldn't help wondering where it came from. The happiness
of the ending is muted and left me with a vague feeling of melancholy.

Then, it struck me.  It reads very well as an allegory of your (our) struggles as a writer. You are Fussy Hen, Slodger the children's book industry - now getting old and lumberingly large; fox at first is the wolf at the door, morphing into the guy who helped you set up Plaister Press; the flood is what threatens us all. 'Fussy hen
found to her surprise that she could steer' - is your discovery that you can take control of your career with a bit of financial backing; the island is where you are now - a lone publisher with the big old one beside you -   not altogether secure but
not drowned either. The ending is safety on a tiny lonely island, so both happy and sad.

I didn't try to figure this out - it just dawned. Maybe it is as much my projection as your unconscious. But anyway - it is a very intriguing example of the way images indirectly and metaphorically can tell a story about change.  I think we are both
so lucky to have started our careers in the 70s and 80's. A golden time.

I can only say this because I've known you so long as a friend - and I hope you won't think I've taken liberties. I hope it sails forth into the world with as much courage as you have shown in producing it and in taking charge. Bravo! To you and Fussy Hen!

Thank you, Joyce, for your insights. My last three picture books have had a water theme but not the one I’m working on now. This new book is about a mouse with not a drop of water in sight.  I wonder what that can mean.

Posted by Gillian McClure at 06:19