This week the UKLA Book awards announced their long list and Flood was included in the 3-7 years category.
Copies had to be sent to the twenty teacher judges.
Since its publication, I’ve used Flood a lot in schools with nursery and foundation. I bring along original artwork for the children to look at and spot how many little creatures, besides the three main characters, are afloat on debris in the flood.

I also have colouring sheets where each creature can be matched with the object it is sitting on in the book.
. 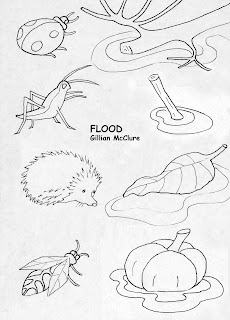 With slightly older children, we make up new characters and start a group story about a flood. Here they are insect characters to fit in with the class’ bug theme. 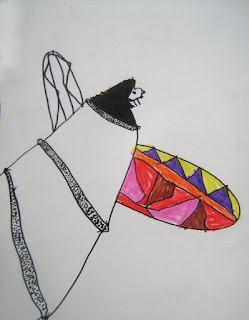 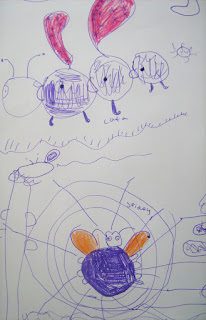 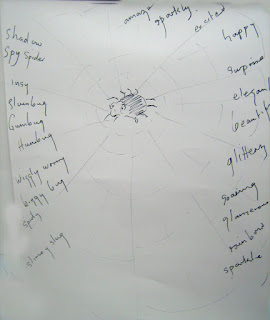 Then there's an opportunity to act out with puppets the orientation part of the story: ‘to the right and to the left’ when the ox, fox and hen cling on to each other’s tails and steer their way through the water. 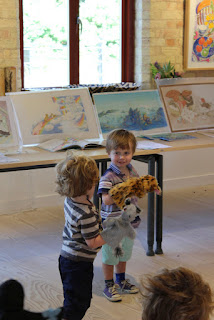 We end with a discussion about friendship. The characters at the start of the story are not nice to each other; the ox wants to kick the fox and the fox wants eat the hen. But they all have to cooperate and work as a team if they are going to survive the flood. By the end a change has occurred and they have become friends.

‘…they had to squash up close. Then the rain stopped and Old Slodger the Ox thought “Maybe, after all I won’t kick the fox.” And the Hungry Fox thought, “Maybe, after all, I won’t eat the hen. And Fussy Hen stopped squawking, and stopped looking this way and that, and was peaceful and quiet.’

But the big question is - will they remain friends once the flood draws back and there are fields again - when life returns to normal?

Posted by Gillian McClure at 07:44