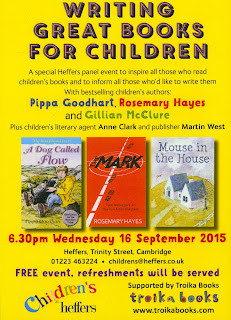 On 16 September, at Heffers Bookshop Cambridge, a panel of three authors, a publisher and an agent will be talking about writing for children.
I’m one of the authors along with Pippa Goodhart and Rosemary Hayes. We each have a new book out. The three books fall into three different age categories:

Rosemary Hayes’s The Mark is a young adult novel. It is edgy and fast moving; a story about a girl Rachel who is rescued from a sex gang by a mysterious boy, Jack. Realism is combined with fantasy in a masterly way. While on one level the book deals with topics relevant to today’s teenagers - the grooming of young girls, traffickers, homelessness and kids on the run - on another level it explores deeper matters. Only very gradually does the reader start to sense something uncanny underlying the developing friendship between Rachel and Jack. Rachel is Jack’s ‘mark’; despite her failings, she has a talent and is worth saving but all is not what it appears with Jack and a startling bittersweet revelation occurs at the end. Rosemary Hayes spins a great story. She structures it in such a way that the past lives of the two protagonists are told in a series of flashbacks that follow each chapter, leaving the narrative free to move at a wonderfully fast pace.

Pippa Goodhart’s A Dog Called Flow, is a chapter book for 8-12 year olds with black and white illustrations by Anthony Lewis. Although this story deals with a child’s dyslexia – Oliver is laughed at and bullied by the other children because of his learning difficulties at school– it was not written as an issue book. Instead it’s a very moving story with a gripping adventure set in a very convincing landscape. I discovered that the places that form the backdrop to the story - the waterfall, the dog show and the farm - all exist. They are in  where Pippa Goodhart’s family have a house. 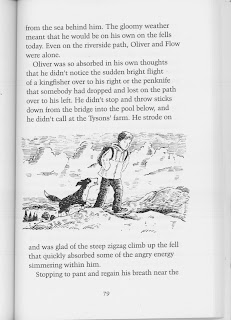 The story starts with Oliver longing for a dog that will ‘love him loyally and uncritically.’ Against his parent’s wishes, Oliver gets a puppy which he saves from being put down. He names it Flow. Flow is blind in one eye and deaf in one ear and his disabilities and the troubles they cause subtly echo those of Oliver.
A Dog Called Flow was Pippa’s first book; runner up in the 2004 Katherine Fidler Award and short listed for the 2005 Smarties award . It is now reissued by Troika Books.
My own book, Mouse in the House, is at the younger end of the picture book category. Here’s a review of it by Catriona Nicholson:


From the front cover bird’s-eye view of a wooden house on a hill and its four local inhabitants (hawk, squirrel, cat and dog) we are held in a spell of page turns as this gentle bedtime story moves us through exquisitely illustrated spreads towards the final image of a sleeping baby, arm cradling a cloth mouse. And throughout the pages, in question and answer format, the text speaks of a mystery: who has heard, seen, smelled, touched that, as yet unseen, mouse that lives in the house on this hill? Each of the creatures, in turn and through rhyme, claims some sensual knowledge until, at last, the revelation page shows us the ‘soft, toy mouse with a squeak in its tail’. The visual journey takes us from the lofty heights of the hawk, downwards through the squirrel’s tree, into the dog’s garden, past the cat at the threshold until we are alongside the baby.  An accomplished ability to orchestrate this delicate play of rhyme, rhythm, perspective, pattern, shape, colour and light defines this picture book for the very young that offers delight at each re-reading.
Posted by Gillian McClure at 06:09