HIERONYMOUS BOSCH WE CAN DO IT 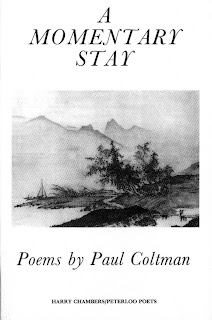 My father, Paul Coltman (1917-2003) 's poem Hieronymous Bosch We Can Do It, is recorded in the above clip for pupils studying the effects of atomic weapons on individuals. The poem is set to images of the bombs dropped in 1945 on Hiroshima and Nagasaki. The first part of the clip with Robert Oppenheimer, father of the atomic bomb, uttering the words "Now I am death, the destroyer of worlds" has mysteriously been removed.

Hieronymous Bosch We Can Do It  is the first poem in A Momentary Stay published by Harry Chambers/ Peterloo Poets.  Harry Chambers was  to publish a posthumous volume of my father's poems but this wonderful publishing house closed down before the book appeared. Harry Chambers sent me the remaining copies of A Momentary Stay in a box, packaged with other books of poetry - the most expensive packaging ever.
Here are two evaluations of Paul Coltman's poetry:
Martin Ward wrote in 2010:
'Paul Coltman has a range of gifts: an ironic and very individual take on the world and its inhabitants, and a constantly exercised sense of the integration of our lives both with times past and with the natural environment, the love of which he stimulates in the reader with tender observations. He was of the generation of 1939-1945, and although he is not a "war poet", warfare provides a recurring theme and subtext, and a plentiful source of imagery throughout his work. Passing on from 1945, he and his poetry entered the apocalyptic age of the cold war and nuclear exchange, furnishing, for the next phase of his output, another stream of concern and of imagery.'

Raphaella Serfati wrote in 2011 about the Hieronymous Bosch We Can Do It clip :
'The interview with Oppenheimer left a strong impact on me and the combination of words and image was very impressive. But I must admit that I was mostly struck by your father's words, meaning, by the poem itself. It's so powerful. I guess it's because of the combination of "positive" words such as "miracles", "astonish" and "celebrate" with the terror and dread of the bomb (which is not mentioned in the text itself, if I am not mistaken, but is only inferred from the context). It's almost as if your father still talks about Nature (as you said he used to), describing a phenomenon which represents or expresses the Sublime, and at the same time, one cannot ignore the presence of the Human parameter in this terrible formula, as an intervening force that shapes a new, modern Nature...'

I will be posting my father's poems on: paulcoltman.blogspot.com
Posted by Gillian McClure at 09:24

Email ThisBlogThis!Share to TwitterShare to FacebookShare to Pinterest
Labels: "Now I am death, 1945, A Momentary Stay, father of the atomic bomb, Harry Chambers/ Peterloo Poets, Hieronymous Bosch We Can Do It, Hiroshima, Nagasaki, Robert Oppenheimer, the destroyer of worlds"